Childhood for many kids in Vietnam is Doraemon – a popular Japanese manga series. Doraemon is a robotic cat who travels back in time to help a good-hearted but clumsy boy named Nobita. As an invention of the 22nd century, Doraemon’s ‘magic’ pocket with his futuristic gadgets with powers that only exist in imagination never ceased to amaze me and many other readers, kids and adults alike.

Do you know where the name ‘Doraemon’ comes from ? ‘Dora’ is, in fact, one of the author’s intentional pun. An all-powerful robot as he is, Doraemon could never resist the temptation of Dorayaki (sandwiched Japanese pancakes) – his favourite thing in the world. Chomping a plateful of Dorayaki brings such joy to Doraemon, and I’m sure you would feel the same way after you try out this recipe.

Doraemon with his most-favourite-food-of-all-time: Dorayaki 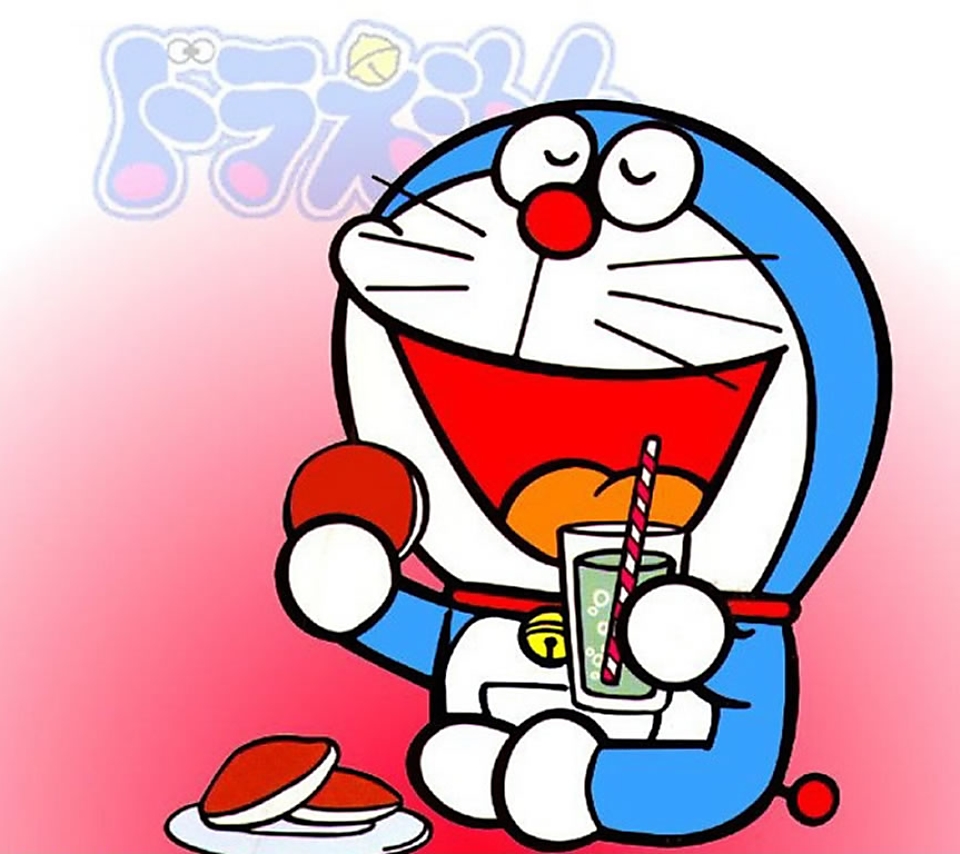 At first sight, making Dorayaki seems easy as pie – after all, it does look like you’re making regular pancakes: one bowl, flour, egg, milk, sugar, mix, and fry. But don’t be fooled, Dorayaki is not a regular pancake. It takes some time for you to perfect the recipe, because I came to realise that if we overmix the batter, even though our pancakes are still going to look fluffy, they will taste a bit tough when we dig in. These pancakes are tell-tale by the tiny air bubbles on their surface.

Don’t worry, they are still very much edible and tasty, but the texture of the true Japanese Dorayaki I have tried is more of a flat sponge cake than a pancake. Therefore, I decided to incorporate light and airy beaten egg whites into the batter. We will have to put in a bit more effort and the pancakes take longer to fry, but trust me, the light, spongy cake is worth it. Plus, we can store them longer (regular pancakes can turn very hard and tough after just a couple of hours), which is wonderful if we decide to make a large batch and refrigerate or freeze them – convenient and yummy Dorayaki whenever we want without reaching for our pantry !

That being said, feel free to choose any one of the two methods. After all, who needs to put Dorayaki in the fridge when you can eat them all

This recipe has a video tutorial and has been uploaded on my YouTube Channel (Savoury Days Kitchen). If you can’t play the video on this site, you can watch it directly on YouTube via this link.

Note: the video is in HD setting and has English subtitle, please press CC to activate it.

1. In a large bowl, add the eggs, sugar, honey and vanilla extract. Whisk until well-combined, the egg mixture doesn’t have to be fluffy.

2. Sieve in the cake flour and baking powder and mix well. Try to stir as quickly as possible and don’t overmix, otherwise the Dorayaki will be quite tough. Cover the bowl and leave it in the fridge for 15 minutes.

3. When you take it out, the batter should be of a pourable consistency. If it is too thick, you can loosen it by adding 1 tsp of water (but try to avoid this – like I said, the more you mix, the tougher the pancakes would be).

4. Fry the pancakes the same way as the first recipe. When pouring the batter into the pan, keep the spoon in one place and pour straight down into the pan, you will have a beautifully round pancake. Remember, don’t stir the batter!

– In the first recipe, try not to break the air bubbles while folding the egg mixture and the flour together. Those air bubbles are our best friends when making fluffy pancakes!

– Use butter instead of vegetable oil to fry the pancakes – it adds richness to the pancake and plus, your kitchen will smell lovely.

– A flat, non-stick frying pan is most preferable. For even heat distribution, fry your pancakes on the electric or induction hob, as the heat tends to concentrate on the bottom of the pan only on a gas stove.

– Fry on low heat to prevent burning the pancakes while the inside is still raw (on my electric hob, I left the pan on level 2/6). When using a thermometer, the pan was about 100°C (212°F). If the pan overheats too much, prepare a damp towel in advance and place the pan on top of the towel to cool it down before you pour in the batter.

– Leave the pancakes to cool on a cooling rack after taking them out of the pan.

– Dorayaki’s traditional filling is made of red bean (azuki). Doremon loves his Dorayaki with thick, creamy and shiny red bean paste, which requires a lot of sugar to make and can be somewhat overly sweet if you don’t have a particular sweet tooth. I used Nutella instead, as shown in the video, which is no less amazing. Other possible options include peanut butter, whipped cream, custard cream (choux crème filling) or matcha custard cream if you still feel like sticking to traditional Japanese flavour.

– For sponge Dorayaki pancakes made using the first method, you can cover them with plastic wrap and refrigerate for 1 – 2 days. About half an hour before serving, take the pancakes out and leave them at room temperature. You can also warm up the Dorayaki in the microwave for 20 – 30 seconds at 600W. Remember to leave the plastic wrap to prevent the pancakes from drying out.

– If you want to store the pancakes longer (for 2 – 3 months), put them in an airtight container into the freezer. Defrost before serving.

– I usually don’t fill the Dorayaki until before I serve them – nothing beats freshly-made fillings.

– For pancakes made by the latter method, consume as soon as possible, as they are not as suitable for long-life storage.

– Pancakes brown unevenly, with brown and white patches: there is too much grease in the pan. Wipe the excess with some paper towel.

– Pancakes are tough and not fluffy:

– Pancakes are mushy and taste egg-y: they are undercooked. Put them back in the pan or adjust the temperature.

Thank you for sharing this wonderful recipe!
What type of flour is used in Japan?
I saw the movie “Sweet Bean” (An) and the powder they add has a complete different texture to the all wheat flour I know (cake flour, all purpose, self-rising, unbleached, etc.) Dango flour, maybe? Could you tell me, please?
Thank you!

can we use all purpose flour instead of cake flour

yes you can, the cake will be slightly less fluffy and soft but it should be fine

Thank you so much for sharing this amazing recipe!
I have a question about using the pancake style. I’m wondering if the texture of the “pancakes” will be different (or not as fluffy as yours) if the batter is refrigerated for longer, say 1 hour?

Thank you for your kind answer.
Does the batter need to be refrigerated? Can I leave it to rest at room temperature?

Yes if the temperature is cool (below 25 deg. C) it should be fine.

You’re welcome & thank you for your interest in our blog posts ^.^

I loved this cat when I was little definitely try this!