There are various types of brownie around the world; but as far as I know, there are only 2 types of brownie texture, which are Cakey and Fudgy. Cakey basically means light, soft, and spongy, much like the texture of a sponge cake. Making a cakey brownie requires creaming butter with sugar carefully before adding flour and eggs. The bubbles that form after the beating process will build up the light texture of the brownie. Fudgy brownie, however, is fairly simple to make compared to cakey one because it doesn’t have to rise up, which means we can skip the creating bubbles process. Plus, all utensils needed for making a fudgy cake are a large mixing bowl, a spoon, and a whisk. In terms of texture, Fudgy brownie is almost identical to Chocolate fudge. In fact, they are both dense, chewy, and moist, just like a combination of chocolate and butter that will melt right after you put it into your mouth.

Plain brownie is quite common because brownie tastes good even by itself. Some of you who are sweet lovers might prefer adding an extra layer of chocolate sauce on top, sometimes with some fresh berries to add a bit of sour taste to balance the sweetness of chocolate. Or if you are in the mood for some cream cheese or mascarpone, you can also add it to your brownie – they will make a good combination as well. Like I said above, there are so many types of brownie out there – definitely more than you can imagine and I feel like we can even write an encyclopedia about brownie! The brownie recipe I am introducing to you today was originally inspired by my huge love for coconut flavor. My co-workers all love this version of brownie – they rated it 9/10. The only reason why they did not give it a perfect 10 was simply because the cake was too small for everyone, each person could only take a tiny bite. Another good thing about this cake is that it can be stored in the fridge for quite a long time. One of my favorite ways to serve this cake during scorching hot summer days is with a scoop of coconut ice cream – the freshness and creaminess of cold coconut ice cream is definitely a great way to defeat the summer heat.

A. Prepare the coconut cheesecake layer:

1. Add cream cheese and coconut cream into the mixing bowl. Stir with wire whisk until the mixture turns smooth and fully incorporated (pic. 4).

* Note: There are different brands of ground coconut, which means they absorb water at different levels. Thus, you will need larger or smaller amount of ground coconut depending on what you have. You can add 25-30 gram to the mixture first, see how it works, then decide how much more ground coconut you need to add.

You can use the regular baking pan that doesn’t have a removable bottom by covering the inside of the baking tray with parchment paper. The edge of the paper should rise above the walls of the baking pan so that you can remove the cake by pulling the edge of baking paper up from the pan.

2. Chop chocolate and butter into small cubes, place into a bowl, melt by using a water bath: Use a small saucepan (smaller than the bowl you used to contain the chocolate and butter). Pour some water into the pan and make sure the water doesn’t touch the bottom of the bowl. Bring water to a boil then place the bowl on top of the pan. Use a whisk to stir well until butter and chocolate melt and become incorporated.

3. Remove the bowl from the pan. Add one egg at a time and mix well before adding another egg. Mixture should become thick and shiny like in pic. 14.

4. Add sugar into the mixture, mix well. You don’t have to wait for the sugar to completely melt. (see pic. 15)

5. Sift the flour, baking powder and salt into the bowl. The best way to do this is to divide the flour into 2-3 portions, sift one portion and mix well before adding the next. 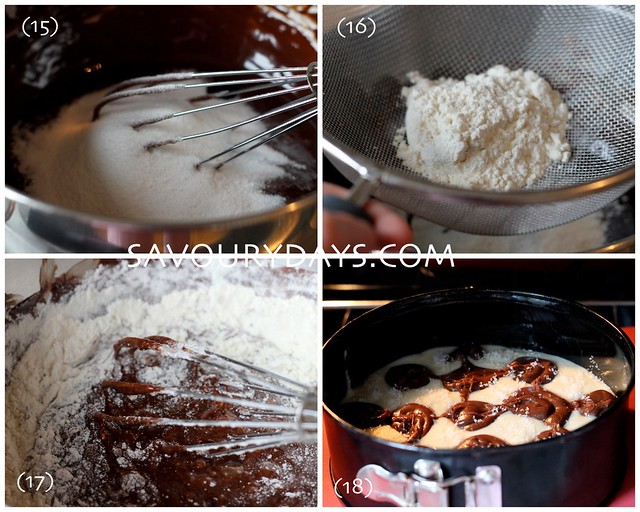 1. Pour 2/3 brownie mixture into the baking pan. Transfer the remaining 1/3 of the mixture to a new piping bag.

4. Sprinkle the remaining ground coconut on the white squares (the cream cheese squares) while the cake is still warm. Let the brownie cool in the baking pan. Once it is cooled, remove the bottom of the pan and get the cake out. Store in the fridge.